Hey folks, it's been a busy week in the workshop, although it's been a case of two steps forward, one step back to be honest.

I glued the braces on this lacewood back and front, and after the glue drying I shaped the braces as normal.  I returned to the workshop to glue the front on and find that both the back AND the front had warped, creating a dished (the wrong way) soundboard!

After a fairly lengthy swearing session both in the workshop, garden, house and on Twitter (which was met with a mix of sympathy and amusement), I stripped the old braces off and started again ... sorry for the poor pic but it'll give you an idea or the warping. 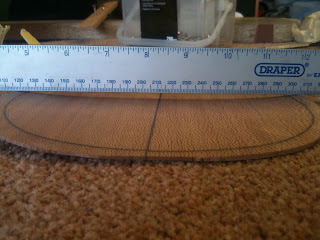 I've been informed this happened because I glued up when it had rained, meaning the soundboard had moisture in it, then dried out, pulling the braces out of shape!
I live and learn.
Did i mention I'm relatively new to this?!
Posted by Cursley Ukuleles at 13:04